Congressman Allen West and Patrick Murphy Gearing Up for Debate 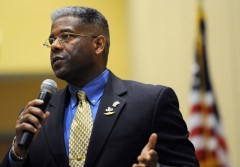 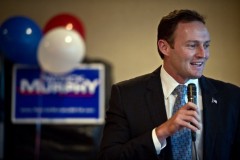 After a two-month debate over debates, U.S. Rep. Allen West and Patrick Murphy will finally sit down Friday on WPTV NewsChannel 5 for a back-and-forth discussion about their rival congressional bids.

West, R-Palm Beach Gardens, and Murphy, a Jupiter Democrat, are slated for an hourlong live debate at 8 p.m. Friday on the West Palm Beach NBC affiliate. WPTV anchor Michael Williams will moderate the debate. A Scripps Treasure Coast Newspapers reporter and a Palm Beach Post reporter will ask questions and follow-ups as panelists. There won’t be an in-studio audience.

It’s the first — and only — debate between the District 18 candidates before the Nov. 6 election. Murphy and West got together for a St. Lucie County League of Women Voters forum a week and a half ago, but the format didn’t include rebuttals.

The West campaign blamed Murphy for the lack of more debates.

“Unfortunately Murphy ran from debates; attacked groups like the Northern Palm Beach Chamber for offering to host a debate; demanded debates without rebuttals, which isn’t even possible; and then finally, under public pressure, agreed to only one debate,” West campaign manager Tim Edson said.

Agreeing on one debate and one forum was its own saga.

In August, West challenged Murphy to four debates. Murphy responded by requesting two — one on WPTV and the League of Women Voters forum.

West’s campaign agreed to the WPTV debate, but turned down the St. Lucie forum. The congressman’s campaign said the League of Women Voters initially didn’t send an invitation, “which calls into question the objectivity of this or any organization that would negotiate a debate with only one candidate.” His schedule was booked, too — the U.S. House had votes scheduled in Washington that day.

“The ones (West) is trying to do are in his backyard with his fans and on his terms, and that’s stupid. He hasn’t shown himself to be able to have a normal conversation with someone across the aisle,” Murphy told the Palm Beach Post. “Why would I go into a debate that he sets up with his people? That doesn’t make any sense.”

Both candidates bashed each other in news releases and in the media for not cooperating. Murphy called out West on “Hardball with Chris Matthews” for not going to four forums. Kusich chided West for not attending a Coalition of Sandpiper Bay Associations forum Oct. 1 in Port St. Lucie. West flew to a fundraiser that day in New York held by Donald Trump.

When the U.S. House went on break early, West’s schedule freed up to attend the League of Women Voters event. Even though a BusinessWeek editorial called the race the country’s nastiest, neither candidate brought up the character attacks they’ve splattered on local TV in ads.

In the ads, West targeted Murphy’s disorderly intoxication arrest at 19, and Murphy probed into West’s military history when the retired lieutenant colonel fired a gun near an Iraqi detainee’s head in 2003.

The tone instead shifted moderate. West even touted his work handing out congressional military medals with U.S. Rep. Corrine Brown, a Democratic member of the Congressional Progressive Caucus. West previously said the group was filled with Communists. In a news release afterward, Edson labeled West “a leader who has served our nation and put principles and solutions before partisan politics.”

Former Democratic Treasure Coast U.S. Rep. Tim Mahoney said both candidates will stay in the middle to keep targeting the 8 or 9 percent of swing voters. He said Murphy has to prove he’s actually a job creator, given he’s only 29 years old; and West has to prove he can work with Democrats, despite regularly ripping them publicly.

Where: Live coverage from the studio will air on WPTV, WPTV.com, TCPalm.com and in the NewsChannel 5 app for iPhone, iPad, Android and Kindle

We are going to document our lives in cyberspace with the desire that our children one day will do the same keeping the chronicle of all of us alive
View all posts by JC →
This entry was posted in Congressman Allen West and Patrick Murphy Gearing Up for Debate. Bookmark the permalink.